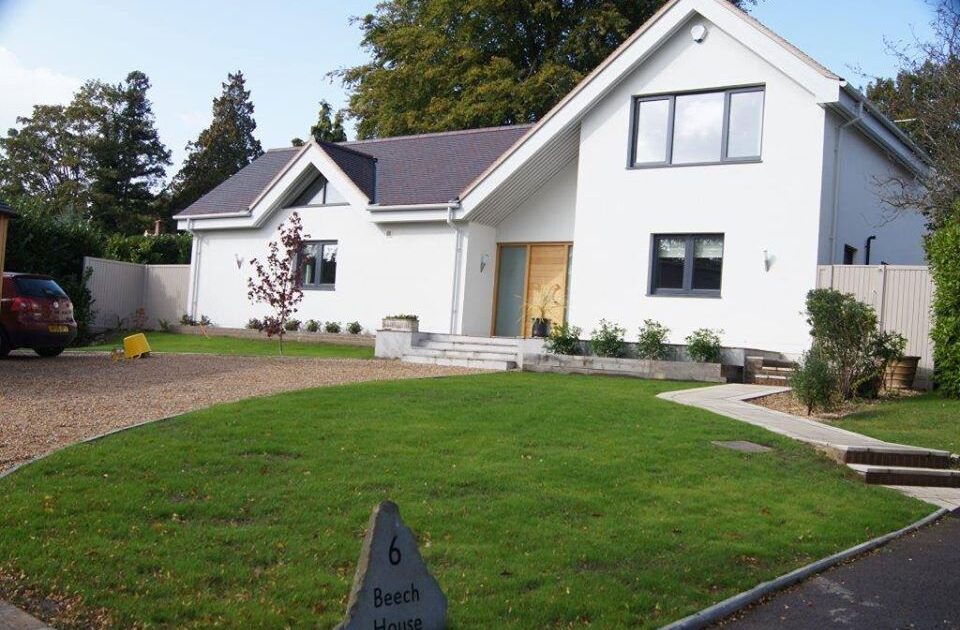 Annie Attwell and Sally Schreiber wanted to have a truly sustainable house.

They were experienced self-Builders having already built themselves two houses to live in but following a move from East Anglia they bought a 1950’s bungalow in Midhurst with the intention of building their third and final dream house. Their wish was quite simple – they wanted a contemporary, clean, high quality sustainable house that was easy to keep and cheap to run.

To get the process underway they appointed Jerry Tate Architects (www.jerrytatearchitects.com) . Jerry owns and runs a London based practice and is extremely keen on sustainable builds. He has twice been commissioned to design houses which have appeared on Grand Designs and, having met Justin Bentley (one of the directors of Timberworks Europe Ltd), he was delighted to recommend Timberworks to supply, build and finish the house both he, Sally and Annie envisaged.

The house itself is a large contemporary building with an internal living area of 192 m2 designed to be flooded with natural light. The principle rooms on the ground floor are a large open plan kitchen diner and a great living room with huge sliding doors looking out onto the garden. Both rooms have full height vaulted ceilings.

Also on the ground floor is a utility room, downstairs cloaks and a separate bathroom and guest bedroom. There is a half landing/library and the stairs lead to a minstrels gallery/corridor off which is a big south facing master bedroom and adjacent bathroom and a dressing room for two.

The whole house is triple glazed, there are aluminium/wood window frames and the roof is tiled.

The site is adjacent to a fantastic Beech tree and as a consequence was erected on a specially designed highly insulated slab to protect the trees roots. Whilst the preparatory work was being undertaken the building was being fabricated in Estonia.

Because of access restrictions and difficulties getting large vehicles to site, the Timberworks trucks were offloaded remotely and all the materials for the superstructure (which included everything down to the last nut and screw) were shuttled in site over a period of 3 days in early October 2013.

The panels were then lifted into place by crane which was required onsite for only 10 days. The roof was assembled from pre-cut glulam ridge beams, trusses and purlins and the building was watertight in 3 weeks allowing first and second fix to start before the worst weather of winter was upon us.

Sadly, due to the horrendous rain in Jan/Feb 2014 specialist contractors were unable to apply the render as it was simply being washed off but despite this Annie and Sally were able to move into their new house at the end of February 2014.

The building has the following Technical specification;

The first half is Timberworks Europe and Justin Bentley…….. This is our third self-build. In our previous build we project managed the build ourselves. This time, however, we wanted a single, one stop shop process. And for the most part that’s what TWE provided. From start to finish, Justin has been on top of everything, working with our best interests in mind. When things went wrong (and you can always count on some things to go wrong on a new build), Justin quickly and efficiently resolved the problems. We found Justin to be a ‘safe pair of hands’ at all times.

Our timber frame was made in Estonia and in general is a quality manufacture. There are a few things that weren’t totally satisfactory, like the over-torqued screws in the external Fermacell boards which necessitated quite a bit of remedial work. But TWE had everything brought up to scratch without demur.

We would recommend TWE without reservation.

building our new home. We have to say that this was the happiest build site we’ve ever seen. The whole of the ETC team, managed by Dave and Richard, were hard-working and conscientious. They never settled for just OK and obviously took justifiable pride in their work. And many of their subcontractors, like the plumber and electrician were excellent.

Now both halves are nearly finished….. We have been living in our new home since the end of February. There

are still some things inside needing to be finished off and the carport and hard landscaping remain to be done, but we are very happy in our new home. It has definitely met our brief.

With thanks to TWE and ETC, Sally and Annie